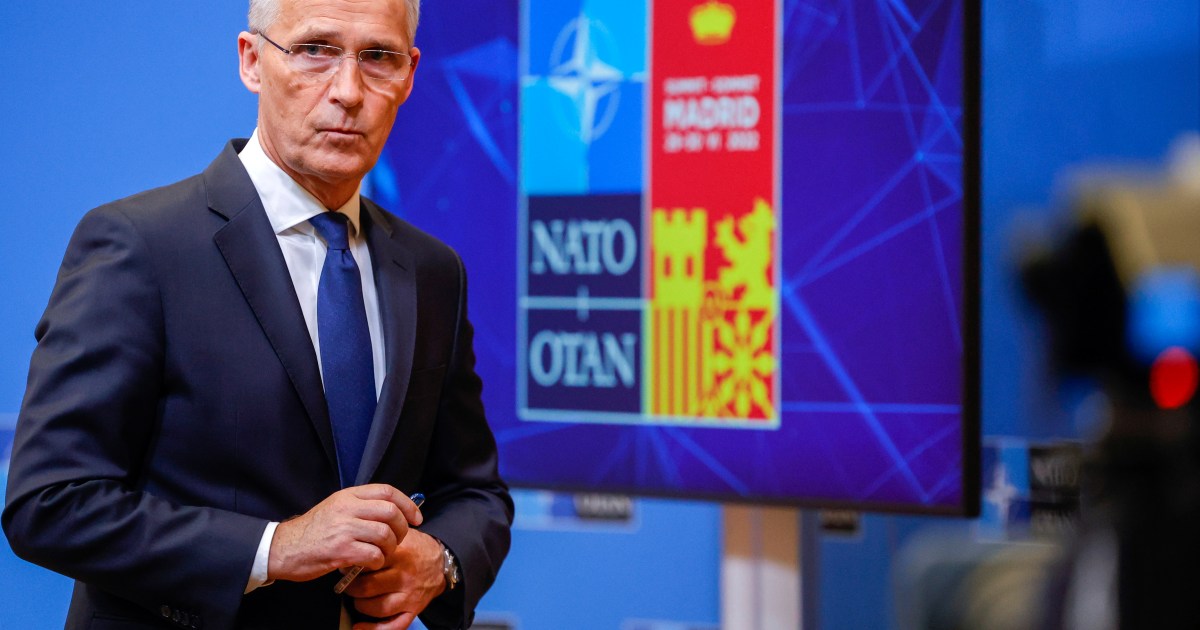 Leaders of the world’s largest defence alliance will convene in Madrid this week for the NATO 2022 summit.

The high-stakes meeting from June 28 to 30 comes at a time of heightened global tension amid Russia’s war in Ukraine.

Here are five things you should know about the summit that security analysts say could affect the defence and security priorities of countries not only in the West, but also around the world.

What’s happening and why is it important

At last year’s NATO summit in Brussels, NATO Secretary-General Jens Stoltenberg highlighted that the alliance’s relationship with Russia was at its “lowest point since the end of the Cold War”.

His words became reality when Russia invaded Ukraine in February, further worsening relations between NATO and the Kremlin.

Harry Nedelcu, head of policy at Rasmussen Global and in charge of its Free Ukraine task force, told Al Jazeera that the summit will likely see NATO agreeing to beef up its presence on its eastern flank.

“An enhanced forward presence with rotational battalions in Poland and the Baltic states was already agreed at the Warsaw summit [in 2016]. The Madrid summit will see allies agreeing to a more enhanced and perhaps even more permanent presence in the east,” he said.

Stoltenberg told reporters on Monday that NATO was planning to “increase the number of our high readiness forces to well over 300,000”.

Elisabeth Braw, senior foreign policy and defence fellow at the American Enterprise Institute, said NATO has shown great unity since Russia’s invasion of Ukraine and it must continue.

“But that display of unity hasn’t been easy because different member states of the alliance have very different geographical locations and different perceptions of the world,” Braw told Al Jazeera.

“Right now, if they start bickering or disagreeing about what to do to help Ukraine, that would be a major setback and a sign of weakness that NATO’s rivals would exploit.”

NATO membership for Sweden and Finland was expected to be swift. Does that still stand?

The icing on the cake of this year’s summit will be Finland and Sweden’s NATO membership bid, according to Braw.

In May, both counties let go of decades of military neutrality and announced that joining the alliance would be a step in the right direction amid the new geopolitical realities in the wake of Russia’s invasion of Ukraine.

But the accession process has stalled after Turkey accused the Nordic neighbours of providing a safe haven for the outlawed Kurdistan Workers’ Party (PKK), which is listed as a “terrorist” group by Turkey and its allies.

During a recent visit to Sweden, Stoltenberg told reporters that NATO was working hard to resolve Turkey’s concerns “as soon as possible”.

“That’s extremely unlikely to happen because Turkey is still opposed to it and so it’s unlikely that Sweden, Finland will be invited into the alliance at the time for the summit,” Braw told Al Jazeera.

“Turkey doesn’t mind playing the role of spoilsport. But what is clear is that Turkey has had real national security concerns regarding the Kurds. That is where Sweden wants to make concessions in particular,” she said.

Will Ukraine ever join NATO?

The Kremlin has long been critical of NATO’s enlargement in eastern Europe.

Addressing a meeting of the Joint Expeditionary Force in March, where some NATO countries convene to discuss solutions to respond to crises, Ukrainian President Volodomyr Zelenskyy said he understood that Ukraine could no longer become a member of NATO.

“For years we heard about the apparently open door, but have already also heard that we will not enter there, and these are truths and must be acknowledged,” he said.

According to Braw, in the foreseeable future and under current circumstances, Ukraine’s ambition to join the European Union was more likely than NATO membership.

“That is a very important goal for them to reach and a goal that is likely but will involve lots of work,” she said.

For Nedelcu, “the biggest and the most powerful way to make Ukraine secure” was to ensure the country was so strong militarily and had a powerful defence industry that it “would become a porcupine impossible to attack”.

One of the biggest debates amid NATO allies is how much each country spends on defence.

In 2006, members of the alliance pledged that every NATO country would dedicate 2 percent of its gross domestic product to defence. But there has been division between members regarding who spends the most on defence.

The ongoing war in Ukraine has magnified the scope of this spending debate.

Nedelcu said that that more and more NATO members are reaching the 2 percent threshold.

China on the agenda?

At the NATO summit last year, Stoltenberg highlighted that “China was coming closer to the alliance” and said that it was important for NATO to develop a clear and united position towards Beijing.

With China’s continued obfuscation on the Kremlin’s war in Ukraine and threats against Taiwan and other countries in the Indo-Pacific region, Nedelcu thinks Stoltenberg’s plea regarding a position on China will be magnified in Madrid, and that it is important to watch for strong language on China at the summit.

“There will be discussions among the alliance’s members regarding China as a strategic competitor. This will also beg the question: what role will NATO seek when it comes to Indo-Pacific security, and how will NATO seek to have a say on security in the Indo-Pacific or the Taiwan Strait as this is increasingly… linked to North Atlantic security,” Nedelcu told Al Jazeera.

With countries such as Japan and South Korea also scheduled to attend the summit, Nedelcu said, the world is becoming more polarised between autocracies and like-minded democracies.

Ramon Pacheco Pardo, professor of international relations and regional envoy for East and Southeast Asia at King’s College London, told Al Jazeera that with the presence of Japan and South Korea, there could be statements regarding North Korea at the summit.

“That matters for South Korea because it can show that there are other countries in Europe and the US that also see North Korea as a threat,” he said.

“And this can lead to practical cooperation, especially on cyber and information sharing, because that’s what NATO is strongest at, when it comes to the Asia-Pacific region.”

Guterres, Erdogan to meet Zelenskyy in Ukraine this week