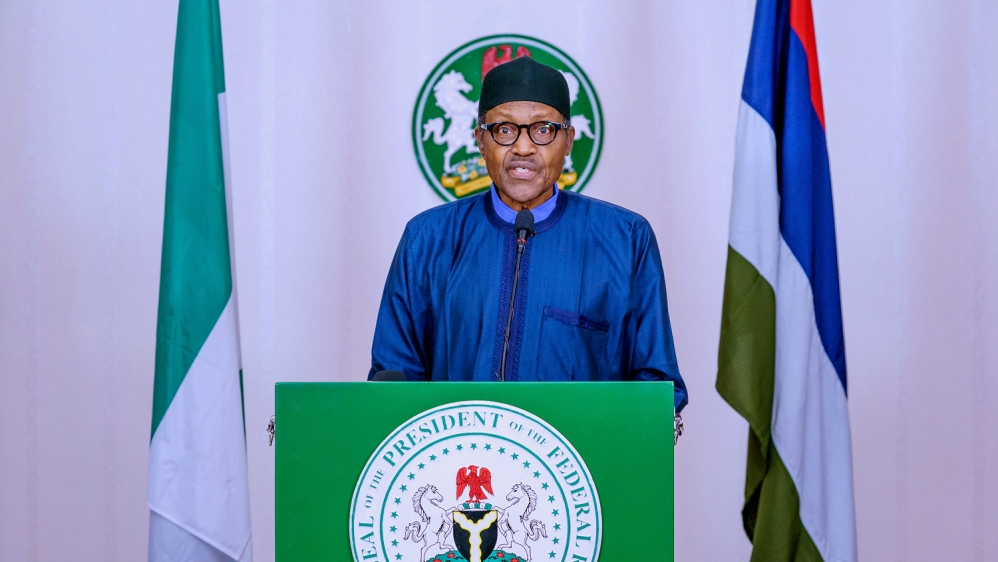 The new acting chief justice was a signatory to a rare complaint by Supreme Court justices against his predecessor.

Abuja, Nigeria – Nigeria’s President Muhammadu Buhari has sworn in a new acting chief justice, barely hours after the resignation of the previous one.

In a swearing-in ceremony on Monday in the capital, Justice Olukayode Ariwoola took the oath of office to replace Tanko Muhammad, who stepped down earlier in the day, citing health reasons.

At the ceremony, Buhari said he had received Justice Tanko Muhammad’s resignation as the land’s highest judicial officer and was “constrained to accept his retirement, albeit with mixed feelings”.

According to the president, the former chief justice was scheduled to retire from the Supreme Court on the last day of 2023 but “unfortunately, as no man is infallible, ill health has cut short Chief Justice Tanko’s leadership of the Nigerian judiciary at this time.”

“Much as one may wish that the Chief Justice of Nigeria Muhammad Tanko is able to fully serve his term in office, it presupposes that he is able to perform the functions of the office without let, hindrance or any form of disability,” Buhari added.

Muhammad’s resignation came barely a week after 14 of the 16 justices of the Supreme Court, including Ariwoola, complained about Muhammad’s leadership, saying he had failed to address the welfare concerns of his colleagues, in a leaked memo.

Until his swearing-in, Ariwoola was the second most senior justice of the Supreme Court. Before his appointment to the apex court in 2011, he spent six years prior at the Court of Appeal, according to the Supreme Court’s website. He was elevated to the appellate court after serving with the state high court of the southwestern state of Oyo.

According to the court’s records, he also served on the election tribunals in Zamfara and Enugu states in 1999 and on election appeal courts in five different cities at various times.

The 63-year-old Ariwoola will steer a Nigerian judiciary that has increasingly been seen as corrupt. Muhammad’s ascendancy to chief justice came after his predecessor Walter Onnoghen was controversially suspended, just weeks ahead of an election in which the judiciary usually plays an important role. The suspension was criticised by local and international observers at the time.

“There is near-universal agreement that public confidence in the judiciary and indeed the legal profession is at an all-time low,” Nigerian Bar Association (NBA) President Olumide Akpata said in a statement on Monday.

“There is now more than ever the need for urgent reforms in the judiciary and to rebuild the almost dissipated confidence that Nigerians have in the judiciary and the wider legal profession in Nigeria,” Akpata said. “These should form the immediate first tasks for Honourable Mr. Justice Olukayode Ariwoola, who is expected to now take over as the Acting Chief Justice of Nigeria.”

An Abuja-based member of the NBA who spoke to Al Jazeera on condition of anonymity because he was not authorised to do, said there are concerns within the lawyers’ body about the timing of Muhammad’s resignation ahead of a pending investigation into the complaints raised against him.

The move seemed “irresistibly linked to the allegations made against him by his brother judges,” he said. “I mean, he hasn’t been in great health for the longest time. What we believe is that an investigation would have thrown up a lot of new issues that would have embarrassed the CJN, making it necessary that he resigns to save himself the trouble.”

Speaking after his swearing-in, Ariwoola said he would “comply, abide and preserve the constitution of Nigeria … with the cooperation of my brother justices of the supreme court.”

“We shall not fail Nigeria,” he added.

He said the issues raised in the leaked memo, to which he was a signatory, are being resolved at the apex court.